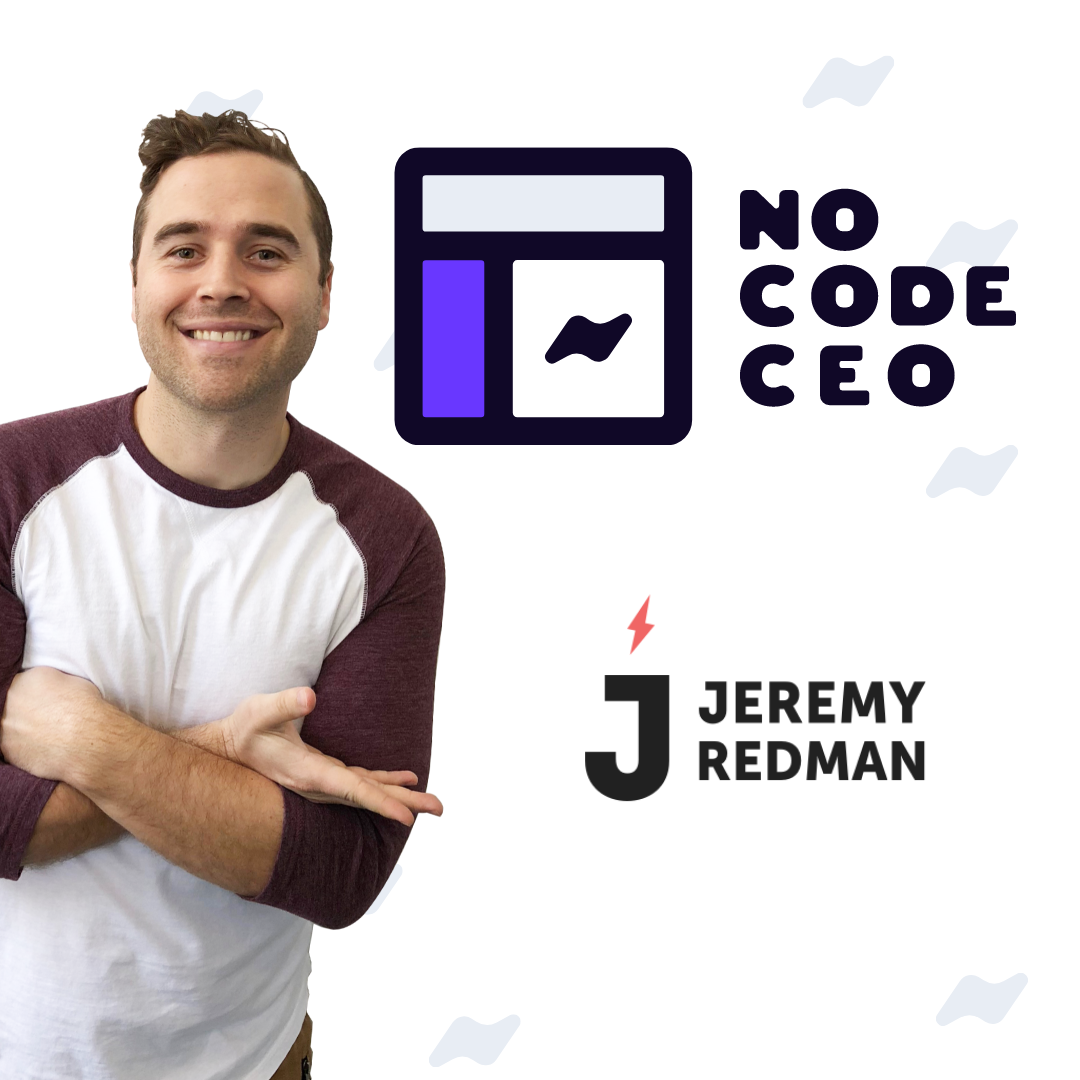 Jeremy: I never know when this is recording it. Okay, cool. Hey Avo. How you doing, man?

Avo Manjerian: Hi, Jeremy. I'm doing great. What about you?

So I just want to like. Dive in here. Tell everyone, um, all the other no-code CEOs out there a little bit about yourself.

Avo Manjerian: Yeah. Perfect. Uh, so my name is . I'm the CEO and co-founder of Schedex. Schedex is the employee management and shift scheduling tool for shift based companies. And we are focusing on the hospitality industry, food and beverages.

So I come from a engineering background, computer engineering work as a data engineer. And now like, as all the CEOs of early stage startups, uh, I do the business thing and think about the product in the same time. Okay.

Avo Manjerian: So like as a product CEO, I'm the one usually who talks to the clients really understand them their pain and make transform those pains into features that my partners as engineers can let's say translate it into features technical ones. Got you.

Jeremy: So did you build in no code for people or do you actually, are you like actually engineering those things or like building them in a no-code solution?

Avo Manjerian: So, this is the interesting part. And we had some sound, let's say discussions with my team internally and where we thought about no-code. Uh, so we built everything by ourselves using, uh, software engineering skills, but for example, uh, coming to let's see, landing page, if you were going to build a landing page, you know, like.

You have very limited resources and to provide your engineering, let's say team or partner to give some time, uh, it's not efficient. It's better to use. The pool has been tested by millions of people. Uh, no, the STO will help you have an Academy and teach you to make a really beautiful landing pages so you can attract customers.

So then they know better than you. They did the research for almost years. So why not to use, let's say a no-code tool to make, let's say the first part landing.

Jeremy: Yeah. Like something ancillary to what you're building.

Avo Manjerian: Yeah, definitely. And you know, what is interesting, for example, as an early stage startup, we have a limited time and you should be focused, but you always want to do, uh, let's say new features or test new product in parallel to start up.

So, because you don't have the leverage because you're coding everything by your own. So that comes handy. For example, during the first day of COVID, we wanted to start an initiative. Uh, to restaurants to sell vouchers because they are our clients. So we want to help them indirectly vouchers that you can purchase.

Now, buy it late, buy it later from the restaurant. So we didn't have the capability to build our own. We didn't have time. So we were like, let's go and search for local tool so we can use, and we can really help make a new initiative. So the two options that we saw mainly to make a software like that was the.

Uh, Melbourne, uh, during that time I started discovering bubble.

Maybe functionality. Yeah. Like the, yeah, I guess we can call it that. Yeah. Like it has the most like, honestly backend functionality. Right. So like you can do the most with it. So, um, what, what do you think about the learning curve of bubbles versus a lot of the other things where you can just pop up a landing page using.

And let's say it will give one to two days to understand really what's happening. Even if you're an engineer. Uh, so imagine if someone coming from a non-tech background, so maybe it will take them one week, two weeks to understand what's happening and trust them. So, yeah, definitely. It has a learning curve.

Jeremy: Yeah, I did. It is funny that like, cause what I'm building, you know, V1 is. Something that is for complete newbies, right? Like it's easy, easy to use. It's like, we're actually talking with bubble about being able to like, w if you're ready for that next step, just exporting from our builder and going right to bubble.

So like for engineers or anyone who wants to get started really quick, just like building. The fast UI and mobile, and then pushing it to them, um, as like something that we're building. So like, that's kind of like the trend that I see going with, uh, piggybacking off what you were saying was, I think it's like no code.

Avo Manjerian: Okay, this is very interesting question. And before going and talking about it first, congratulations on being nominated for the best product on product hunt. Oh my

And congrats. So let me tell you this. So engineers are mainly afraid of no code, and this is very funny because. People shouldn't be afraid of new things, new technology, because they are afraid that they will replace their jobs. You know? So, so this is the big team, but I believe. We shouldn't. We should never think about it that way.

It's way of going faster, faster to result, faster to monetize. And for example, now, do you create your own server? No. You just use AWS. You host your all serve me email. No, you go and use G suite. So same for everything. So I believe no code would be with time, let's say not replacing developers, but complementing the developers to have faster results, especially for, let's say simple tools, not complicated AI machine learning tools that people are going to use.

Avo Manjerian: Other than the benefit? There is a problem of too many no-code options.

Like everyone wants to build an Oracle tool so that Trent is making the users let's say, uh, not true what to use. All

Jeremy: right. That's a good one. That's a good, it's kind of like, uh, yeah, that's kinda like the downside of what like no-code is right now. Like I think, I think you're right. It is very, very, very fucking cluttered.

What are you doing here? And it's like, what do you, so on that dovetailing off of that, what do you believe will make a, the no-code of make a new NOCO tool stand out.

Avo Manjerian: So I believe like other than focusing on engineers, building tools, we need the local community should focus on, uh, let's say, solo entrepreneurs to start a business and having a prototype in just one day, it works on web on mobile.

So someone can make this possible, uh, seamlessly without bullshit. Uh, that will be perfect validation phase because it's now people are lucky. Before they didn't have AWS things like that. And to start the company, you needed huge investment. Now we don't eat that. So you subscribe to, let's say, uh, AWS or in the future, it will be an Oracle tool that will help you to create a product, uh, with, uh, let's say, a fraction of a development costs.

And you will, you will make a business out of it. And for example, be a unicorn. So I believe that's the future, uh, to be easy, easy, no need to target engineers, help solo entrepreneurs to start a business. But the long run, it will be, the engineers can interact with that tool and to make it perfect, you know, in parallel.

Jeremy: Yeah. I love that. Cool. So to wrap up here, what do you, what is the biggest tip for no coders out there that you might have,

Avo Manjerian: like make it super easy? With a very small, uh, learning curve that works on web and mobile, especially mobile. So people are building things for web only, and especially solo entrepreneurs.

They are mainly. E-commerce or B2C. So they're mainly they want, they want to build mobile apps. No. So if you make them web apps, I don't know how much you will help that user.

Jeremy: Got you. Cool. Ivo. Thanks. Where can people find you? I found you on Twitter and now we're going to stay engaged forever, but where can work in every what's your, what's your Twitter handle?

Avo Manjerian: Yes, I've got many of my Twitter handle or they can find me on LinkedIn, uh, ABO Manchurian, uh, and for sure they can go to our websites, uh, our startup website, which is the employee management and chief scheduling smart tool for shift based companies.  dot me, scatters schedule. He acts.me and perfect.

Jeremy: Awesome ABO, we're going to have to have you back on so we can check back in with all the progress and I can update you as well. I look forward to, uh, to having that second meeting, my man,

Avo Manjerian: definitely, man, it was a pleasure. Congrats. Hopefully you will win the category. If not like, uh, I'm rooting for you.

As I wrote it for web flow blood, who was an inspiration. So go on. Love

Jeremy: you, man. Thank you so much, dude. You're the best.

Signup to get no code stuff delivered straight to the inbox.

Thank you! Your submission has been received!
Oops! Something went wrong while submitting the form.

NoCodeCEO helps no coders profit from their maker mentalities

Need time to chat no code?Signup for a no code session